Converting Between Fractions, Decimals and Percentages

The importance of equivalent fractions

In the starter I want to remind students how to work with equivalent fractions, especially those that have denominators which are factors of one hundred.  Later in the lesson they will use this to convert a percentage to a simplified fraction.

I include the factors of one hundred as a reminder.  This way students focus on matching the equivalent fractions rather than trying to calculate how many times the denominator goes into one hundred.

Understanding the equivalence between fractions, decimals and percentages

Click to view the video on converting between fractions, decimals and percentage using place value.

I work through questions a) to c) for the students then ask them to attempt d) to j) one at a time on mini-whiteboards.  Each time I feedback to address any misconceptions.

Can a percentage be more than 100?

When I ask the class to convert 1.25 to a fraction and percentage students follow the same method but some question the validity of their final outcome commenting “a percentage cannot be greater than one hundred”.  To address this common misconception, we discuss how percentages can be used to show growth.  For instance, when something increases by 5% in value, we take 100% as the original and 105% as the new value.  Hence, the need for percentages greater than 100.

Converting a Percentage to a Simplified Fraction 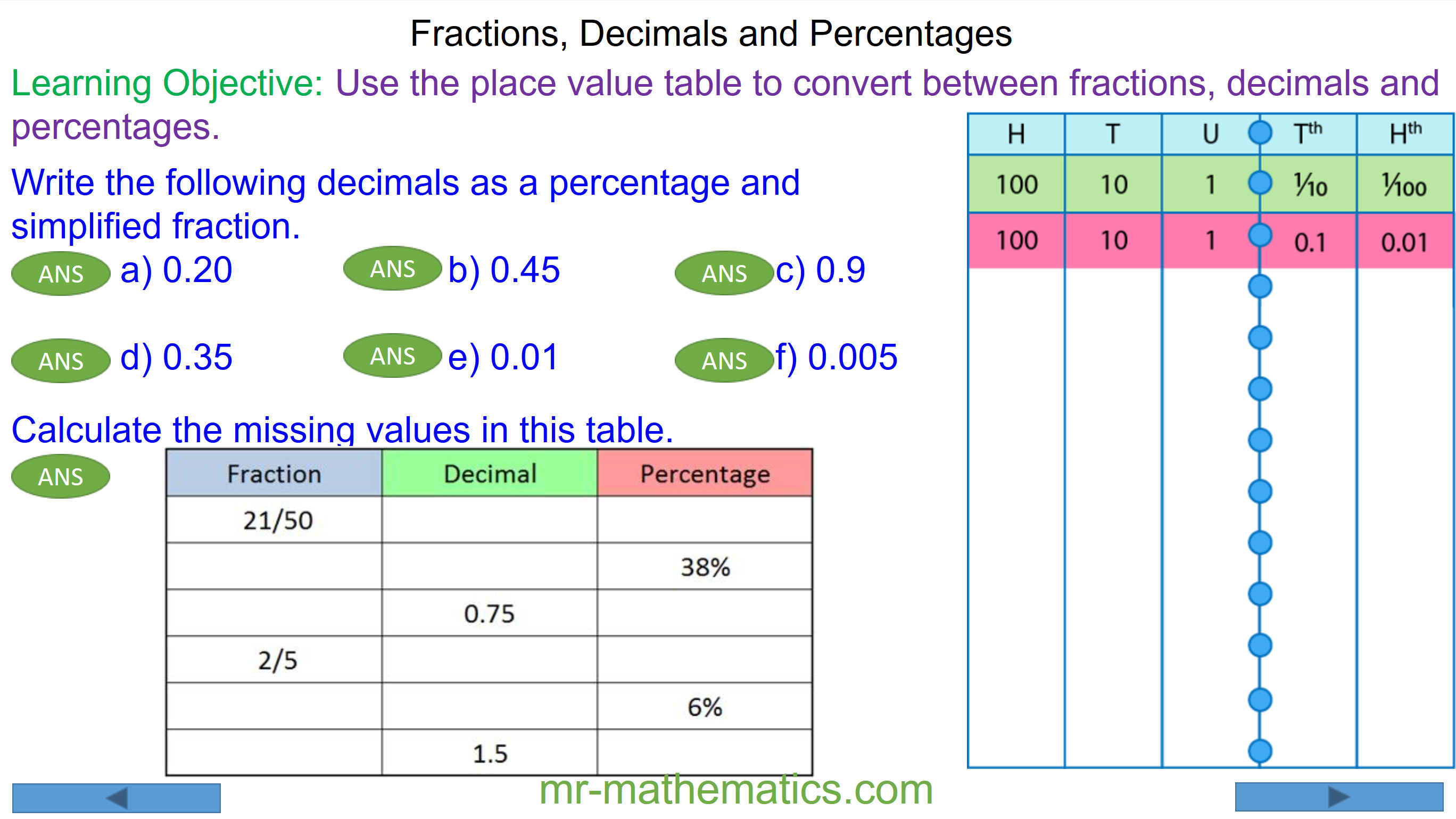 So far, as a class, we have only considered fractions with a denominator of one hundred.  We now progress on to converting a decimal to a percentage and simplified fraction.  We know 0.50, or 0.5, is equal to 50/100.  50/100 can be simplified by dividing the numerator and denominator by the highest common factor of each.  Therefore 50/100 is equivalent to 1/2. We work through a few more examples with students presenting their processing on their mini-whiteboards.

Converting a Fraction to a Percentage and Decimal

To write a fraction in the place value table we discuss the need for the denominator to be a power of ten.  For instance, converting 4/10 to a percentage is easier than 3/5. Next, we discuss how to convert fractions such as 3/5 to 6/10 using equivalent fractions.

Differentiating for the least and most able

When converting between fractions, decimals and percentages I may provide the factor pairs of one hundred for the less able students as well as a laminated place value table.  I challenge the more able students by asking them to convert fractions such as 1/40, and 3/8 to percentages.

My name is Jonathan Robinson and I passionate about teaching mathematics. I am currently Head of Maths in the South East of England and have been teaching for over 15 years. I am proud to have helped teachers all over the world to continue to engage and inspire their students with my lessons.

Importance of Place Value in Mathematics

In secondary school mathematics the place value table underpins so many fundamental mathematical concepts. For students to begin to appreciate the size of a number or how to write numbers in words they need to have a secure understanding of its application.

This site uses Akismet to reduce spam. Learn how your comment data is processed.

Trigonometric Identities Sin, Cos and Tan

How to introduce the sin, cos and tan trigonometric identities.

How to teach calculating the original amount after a percentage change.

The importance of the range when comparing comparing datasets.